We all know what an airplane is supposed to look like. A body with wings and a tail attached… and a cockpit at the front. A child could tell you the same.

But Air Force engineers don’t agree. It just takes a single look at the F-35 or the F117 Nighthawk to see that our concept of aircraft has dramatically shifted from what it was during World War II. From jet engines capable of reaching speeds twice that of sound, to even unmanned drones, the aircraft industry continues to evolve.

Recently, an image on the internet caught my attention. It was a side-by-side comparison of the B2 Stealth bomber and a peregrine falcon. 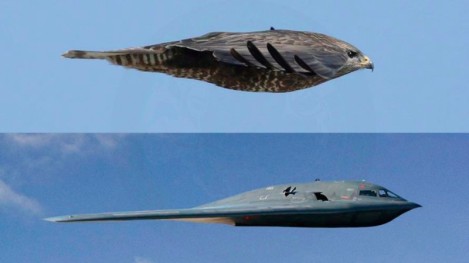 The similarity is striking. But despite its futuristic appearance, this technology is not new. The B2 Bomber is simply one of many tailless, stealth aircraft. In fact, some claim the inspiration for this design dates all the way back to the German prototype Horten 229 of the Second World War. END_OF_DOCUMENT_TOKEN_TO_BE_REPLACED